Development of a Control System for a Tele Operated Mobile Robot 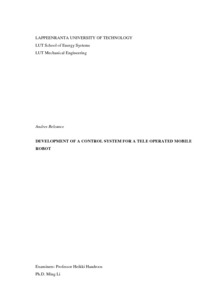 Mobile robots are capable of performing spatial displacement motions in different environments. This motions can be calculated based on sensorial data (autonomous robot) or given by an operator (tele operated robot). This thesis is focused on the latter providing the control architecture which bridges the tele operator and the robot’s locomotion system and end effectors. Such a task might prove overwhelming in cases where the robot comprises a wide variety of sensors and actuators hence a relatively new option was selected: Robot Operating System (ROS). The control system of a new robot will be sketched and tested in a simulation model using ROS together with Gazebo in order to determine the viability of such a system. The simulated model will be based on the projected shape and main features of the real machine. A stability analysis will be performed first theoretically and afterwards using the developed model.
This thesis concluded that both the physical properties and the control architecture are feasible and stable settling up the ground for further work with the same robot.