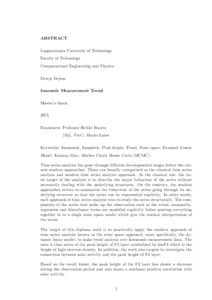 Time series analysis has gone through diﬀerent developmental stages before the current modern approaches. These can broadly categorized as the classical time series analysis and modern time series analysis approach. In the classical one, the basic target of the analysis is to describe the major behaviour of the series without necessarily dealing with the underlying structures. On the contrary, the modern approaches strives to summarize the behaviour of the series going through its underlying structure so that the series can be represented explicitly. In other words, such approach of time series analysis tries to study the series structurally. The components of the series that make up the observation such as the trend, seasonality, regression and disturbance terms are modelled explicitly before putting everything together in to a single state space model which give the natural interpretation of the series.
The target of this diploma work is to practically apply the modern approach of time series analysis known as the state space approach, more speciﬁcally, the dynamic linear model, to make trend analysis over Ionosonde measurement data. The data is time series of the peak height of F2 layer symbolized by hmF2 which is the height of high electron density. In addition, the work also targets to investigate the connection between solar activity and the peak height of F2 layer.
Based on the result found, the peak height of the F2 layer has shown a decrease during the observation period and also shows a nonlinear positive correlation with solar activity.