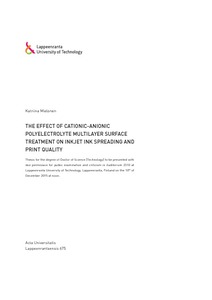 The focus of the work reported in this thesis was to study and to clarify the effect of
polyelectrolyte multilayer surface treatment on inkjet ink spreading, absorption and print
quality. Surface sizing with a size press, film press with a pilot scale coater, and spray coating,
have been used to surface treat uncoated wood-free, experimental wood-free and pigmentcoated
substrates. The role of the deposited cationic (polydiallydimethylammonium chloride,
PDADMAC) and anionic (sodium carboxymethyl cellulose, NaCMC) polyelectrolyte layers
with and without nanosilica, on liquid absorption and spreading was studied in terms of their
interaction with water-based pigmented and dye-based inkjet inks.
Contact angle measurements were made in attempt to explain the ink spreading and wetting
behavior on the substrate. First, it was noticed that multilayer surface treatment decreased the
contact angle of water, giving a hydrophilic character to the surface. The results showed that
the number of cationic-anionic polyelectrolyte layers or the order of deposition of the
polyelectrolytes had a significant effect on the print quality. This was seen for example as a
higher print density on layers with a cationic polyelectrolyte in the outermost layer. The number
of layers had an influence on the print quality; the print density increased with increasing
number of layers, although the increase was strongly dependent on ink formulation and
chemistry.
The use of nanosilica clearly affected the rate of absorption of polar liquids, which also was
seen as a higher density of the black dye-based print. Slightly unexpected, the use of nanosilica
increased the tendency for lateral spreading of both the pigmented and dye-based inks. It was
shown that the wetting behavior and wicking of the inks on the polyelectrolyte coatings was
strongly affected by the hydrophobicity of the substrate, as well as by the composition or
structure of the polyelectrolyte layers.
Coating only with a cationic polyelectrolyte was not sufficient to improve dye fixation, but it was demonstrated that a cationic-anionic-complex structure led to good water fastness. A threelayered
structure gave the same water fastness values as a five-layered structure. Interestingly,
the water fastness values were strongly dependent not only on the formed cation-anion
polyelectrolyte complexes but also on the tendency of the coating to dissolve during immersion
in water. Results showed that by optimizing the chemistry of the layers, the ink-substrate
interaction can be optimized.