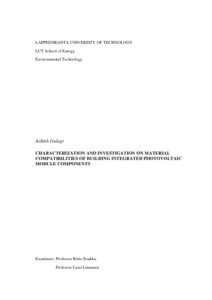 Building Integrated Photovoltaics (BIPV) are considered as the future of photovoltaic (PV) technology. The advantage of BIPV system is its multi-functionality; they fulfil the functions of a building envelope with the added benefit of generating power by replacing the traditional roofing and façade materials with PV that generate power.
In this thesis, different types of PV cells and modules have been described in detail with their efficiencies and usage trends in the last decade. The different BIPV products for roof and façade are discussed in detail giving several examples. The electricity generation potential of BIPV in selected countries is compared with their actual electricity consumption. Further, the avoided greenhouse gas (GHG) emissions associated with electricity generation from traditional sources and transportation and distribution (T&D) losses are calculated. The results illustrate huge savings in GHGs.
In BIPV different types of façade and backsheets are used. In this thesis, selected backsheets and façade were characterized in terms of their surface structure identification using infrared spectroscopy (FTIR-ATR), scanning electron microscopy with energy dispersive X-ray (SEM-EDX) and physical characterization using surface energy measurements. By using FTIR-ATR, surface polymeric materials were identified and with SEM-EDX, identification of the surface elements was possible. Surface energy measurements were useful in finding the adhesives and knowing the surface energies of the various backsheets and façade. The strength of adhesion between the facade and backsheets was studied using peel test. Four different types of adhesives were used to study the fracture pattern and peel tests values to identify the most suitable adhesive. It was found out that pretreatment increased the adhesive strength significantly.