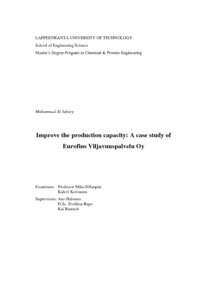 In any manufacturing system, there are many factors that are affecting and limiting the capacity of the entire system. This thesis addressed a study on how to improve the production capacity in a Finnish company (Viljavuuspalvelu Oy) through different methods like bottleneck analysis, Overall Equipment Effectiveness (OEE), and Just in Time production.
Four analyzing methods have been studied in order to detect the bottleneck machine in Viljavuuspalvelu Oy. The results shows that the bottleneck machine in the industrial area that constraint the production is the grinding machine while the bottleneck machine in the laboratory section is the photometry machine. In addition, the Overall Equipment Effectiveness (OEE) of the entire system of the studied case was calculated and it has been found that the OEE of the Viljavuuspalvelu Oy is 35.75%. Moreover, two methods on how to increase the OEE were studied and it was shown that either the total output of the company should be 1254 samples/shift in order to have an OEE around 85% which is considered as a world class or the Ideal run rate should be 1.45 pieces/minute. In addition, some realistic methods are applied based on the finding in this thesis to increase the OEE factor in the company and in one realistic method the % OEE has increase to 62.59%. Finally, an explanation on how to implement the Just in Time production in Viljavuuspalvelu Oy has been studied.