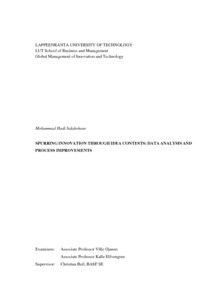 This research concerns the Urban Living Idea Contest conducted by Creator Space™ of BASF SE during its 150th anniversary in 2015. The main objectives of the thesis are to provide a comprehensive analysis of the Urban Living Idea Contest (ULIC) and propose a number of improvement suggestions for future years. More than 4,000 data points were collected and analyzed to investigate the functionality of different elements of the contest. Furthermore, a set of improvement suggestions were proposed to BASF SE. Novelty of this thesis lies in the data collection and the original analysis of the contest, which identified its critical elements, as well as the areas that could be improved. The author of this research was a member of the organizing team and involved in the decision making process from the beginning until the end of the ULIC.