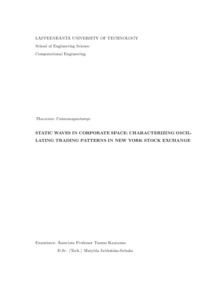 Various researches in the field of econophysics has shown that fluid flow have analogous phenomena in financial market behavior, the typical parallelism being delivered between energy in fluids and information on markets. However, the geometry of the manifold on which market dynamics act out their dynamics (corporate space) is not yet known.
In this thesis, utilizing a Seven year time series of prices of stocks used to compute
S&P500 index on the New York Stock Exchange, we have created local chart to the
corporate space with the goal of finding standing waves and other soliton like patterns
in the behavior of stock price deviations from the S&P500 index. By first calculating
the correlation matrix of normalized stock price deviations from the S&P500 index, we
have performed a local singular value decomposition over a set of four different time
windows as guides to the nature of patterns that may emerge.
I turns out that in almost all cases, each singular vector is essentially determined by
relatively small set of companies with big positive or negative weights on that singular
vector. Over particular time windows, sometimes these weights are strongly correlated
with at least one industrial sector and certain sectors are more prone to fast dynamics
whereas others have longer standing waves.