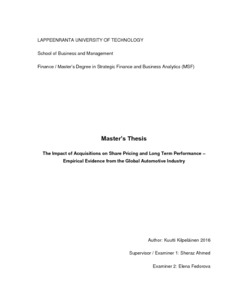 Automotive industry has faced intense consolidation pressure, which has lead to increasing number of M&As. However, empirical evidence has given controversial results suggesting that most of M&As are value destructive for acquiring companies and for acquiring companies’ shareholders. The objective of this master’s thesis is to examine how acquiring companies’ shareholders react to acquisition announcement and is the reaction in line with the long-term performance. This study uses empirical evidence from automotive industry, which has been characterized as an industry that holds large amount of vertical and horizontal synergies. Transaction data consists of 65 acquisitions made by publicly listed companies between 2008-2010. The short-term impact is tested by applying event study methodology while the long term operative performance is examined with accounting study methodology.
The event study results indicate that during the three days after acquisition (t= 0-2), the acquiring firms’ stocks generate an abnormal return of 1.22% on average across all acquisitions.
When long term performance is studied it is evident that acquiring companies perform better than the industry median pre- and post-transaction but there is no statistically significant evidence that the performance has increased. The only performance ratio indicating statistically significant decrease is Return on Equity (ROE). On long-term horizontal acquisitions seem to outperform conglomerate ones but otherwise deal characteristics do not have any statistically significant impact.