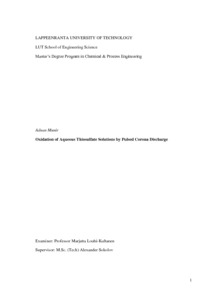 The aim of this Master’s thesis focused on the oxidation of sodium thiosulfate using non thermal plasma technology as an advance oxidation process (AOP). By using this technology we can degrade certain toxic chemical compounds present in mining wastewaters as pollutants. Different concentrations of thiosulfate and pulse frequencies were used in the PCD experiments and the results in terms of various delivered energies (kWh/m3) and degradation kinetics were compared.

Pulsed corona discharge is an energy efficient process compared to other oxidation processes using for the treatment of waste water pollutants. Due to its simplicity and low energy costs make it attractive in the field of waste water treatment processes. This technology of wastewater treatment has been tested mainly on pilot scale level and in future the attempts are to be focus on PCD investigations on larger process scale. In this research work of oxidation of thiosulfate using pulsed corona discharge, the main aim of this research was to study degradation of a studied toxic and not environmental friendly chemical compound. The focus of this research was to study the waste waters coming from the gold mines containing leachate compound thiosulfate. Literature review contained also gold leaching process when cyanide is used as the leachate. Another objective of this work was to compare PCD process with other processes based on their energy efficiencies.

In the experimental part two concentrations of sodium thiosulfate, 1000ppm and 400ppm, were used. Two pulse generator frequencies of 833 and 200 pulses per second (pps) were used. The chemical analyses of the samples taken during semi-batch PCD oxidation process were analyzed by ion chromatographic (IC). It is observed after the analyses that among different frequencies and concentrations, the most suitable ones for the process is 200pps and 1000ppm respectively because the pollutants present in the waste water has more time to react with the OH radicals which are the oxidants and the process is energy efficient compared to other frequencies.