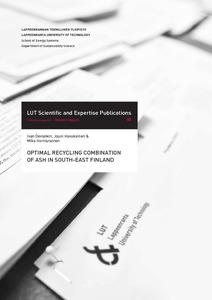 The present world energy production is heavily relying on the combustion of solid fuels like coals, peat, biomass, municipal solid waste, whereas the share of renewable fuels is anticipated to increase in the future to mitigate climate change. In Finland, peat and wood are widely used for energy production. In any case, the combustion of solid fuels results in generation of several types of thermal conversion residues, such as bottom ash, fly ash, and boiler slag. The predominant residue type is determined by the incineration technology applied, while its composition is primarily relevant to the composition of fuels combusted.
An extensive research has been conducted on technical suitability of ash for multiple recycling methods. Most of attention was drawn to the recycling of the coal combustion residues, as coal is the primary solid fuel consumed globally. The recycling methods of coal residues include utilization in a cement industry, in concrete manufacturing, and mine backfilling, to name few. Biomass combustion residues were also studied to some extent with forest fertilization, road construction, and road stabilization being the predominant utilization options. Lastly, residues form municipal solid waste incineration attracted more attention recently following the growing number of waste incineration plants globally. The recycling methods of waste incineration residues are the most limited due to its hazardous nature and varying composition, and include, among others, landfill construction, road construction, mine backfilling.
In the study, environmental and economic aspects of multiple recycling options of thermal conversion residues generated within a case-study area were studied. The case-study area was South-East Finland. The environmental analysis was performed using an internationally recognized methodology — life cycle assessment. Economic assessment was conducted applying a widely used methodology — cost-benefit analysis. Finally, the results of the analyses were combined to enable easier comparison of the recycling methods. The recycling methods included the use of ash in forest fertilization, road construction, road stabilization, and landfill construction. Ash landfilling was set as a baseline scenario.
Quantitative data about the amounts of ash generated and its composition was obtained from companies, their environmental reports, technical reports and other previously published literature. Overall, the amount of ash in the case-study area was 101 700 t. However, the data about 58 400 t of fly ash and 35 100 t of bottom ash and boiler slag were included in the study due to lack of data about leaching of heavy metals in some cases. The recycling methods were modelled according to the scientific studies published previously.
Overall, the results of the study indicated that ash utilization for fertilization and neutralization of 17 600 ha of forest was the most economically beneficial method, which resulted in the net present value increase by 58% compared to ash landfilling. Regarding the environmental impact, the use of ash in the construction of 11 km of roads was the most attractive method with decreased environmental impact of 13% compared to ash landfilling. The least preferred method was the use of ash for landfill construction since it only enabled 11% increase of net present value, while inducing additional 1% of negative impact on the environment.
Therefore, a following recycling route was proposed in the study. Where possible and legally acceptable, recycle fly and bottom ash for forest fertilization, which has strictest requirements out of all studied methods. If the quality of fly ash is not suitable for forest fertilization, then it should be utilized, first, in paved road construction, second, in road stabilization. Bottom ash not suitable for forest fertilization, as well as boiler slag, should be used in landfill construction. Landfilling should only be practiced when recycling by either of the methods is not possible due to legal requirements or there is not enough demand on the market.
Current demand on ash and possible changes in the future were assessed in the study. Currently, the area of forest fertilized in the case-study are is only 451 ha, whereas about 17 600 ha of forest could be fertilized with ash generated in the region. Provided that the average forest fertilizing values in Finland are higher and the area treated with fellings is about 40 000 ha, the amount of ash utilized in forest fertilization could be increased. Regarding road construction, no new projects launched by the Center of Economic Development, Transport and the Environment in the case-study area were identified. A potential application can be found in the construction of private roads. However, no centralized data about such projects is available. The use of ash in stabilization of forest roads is not expected to increased in the future with a current downwards trend in the length of forest roads built. Finally, the use of ash in landfill construction is not a promising option due to the reducing number of landfills in operation in Finland.