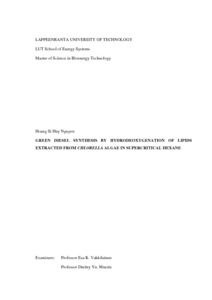 Lipids were extracted from Chlorella algae with supercritical hexane. The high lipids yield of approximately 10% was obtained at optimum conditions of 300 rpm stirring speed and 2 h duration compared to the total contents of lipids being 12%. Furthermore, an easiness of hexane recovery may be considered as economically and ecologically attractive. For the first time, in the current work catalytic hydrodeoxygenation (HDO) of Chlorella algal lipids was studied over 5 wt% Ni/H-Y-80 and 5 wt% Ni/SiO2 at 300 C and under 30 bar total pressure in H2. A comparative HDO of stearic acid was carried out under similar conditions. The conversion of lipids was about 35% over 5 wt% Ni/H-Y-80 after 6h, whereas, 5 wt% Ni/SiO2 was totally deactivated after 60 min. The selectivity to hydrocarbons (C15-C18) is 6%. As a comparison, complete conversion of stearic acid over 5 wt% Ni/H-Y-80 was achieved in 6 h. The transformation of lipids proceeded mostly via hydrogenation and hydrolysis with formation of free fatty acid (FFA). The lower activity might be attributed to deactivation of catalysts caused by chlorophylls and carotenoids. Even though the conversion is low, future studies in HDO of lipids extracted from other algae species having higher lipid content could be proposed. Coke resistant catalyst might be considered to improve catalytic activity.