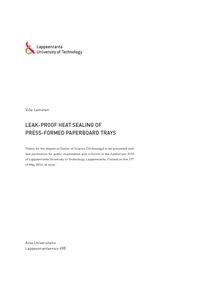 Three-dimensional (3D) forming of paperboard and heat sealing of lidding films to trays
manufactured by the press forming process are investigated in this thesis. The aim of the
work was to investigate and recognize the factors affecting the quality of heat sealing and
the leak resistance (tightness) of press-formed, polymer-coated paperboard trays heatsealed
with a multi-layer polymer based lidding film. One target was to achieve a solution
that can be used in food packaging using modified atmosphere packaging (MAP). The
main challenge in acquiring adequate tightness properties for the use of MAP is creases
in the sealing area of the paperboard trays which can act as capillary tubes and prevent
leak-proof sealing.
Several experiments were made to investigate the effect of different factors and process
parameters in the forming and sealing processes. Also different methods of analysis, such
as microscopic analysis and 3D-profilometry were used to investigate the structure of the
creases in the sealing area, and to analyse the surface characteristics of the tray flange of
the formed trays to define quality that can be sealed with satisfactory tightness for the use
of MAP. The main factors and parameters that had an effect on the result of leak-proof
sealing and must be adjusted accordingly were the tray geometry and dimensions, blank
holding force in press forming, surface roughness of the sealing area, the geometry and
depth of the creases, and the sealing pressure.
The results show that the quality of press-formed, polymer-coated paperboard trays and
multi-layer polymer lidding films can be satisfactory for the use of modified atmosphere
packaging in food solutions. Suitable tools, materials, and process parameters have to be
selected and used during the tray manufacturing process and lid sealing process, however.
Utilizing these solutions and results makes it possible for a package that is made mostly
from renewable and recyclable sources to be a considerable alternative for packages made
completely from oil based polymers, and to achieve a greater market share for fibre-based
solutions in food packaging using MAP.