Droplet Deposition in the Last Stage of Steam Turbine 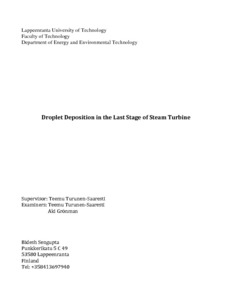 During the expansion of steam in turbine, the steam crosses the saturation line and hence subsequent turbine stages run under wet condition. The stages under wet condition run with low efficiency as compared to stages running with supersaturated steam and the life of the last stage cascade is reduced due to erosion. After the steam crosses the saturation line it does not condense immediately but instead it becomes supersaturated which is a meta-stable state and reversion of equilibrium results in the formation of large number of small droplets in the range of 0.05 - 1 μm. Although these droplets are small enough to follow the stream lines of vapor however some of the fog droplets are deposited on the blade surface. After deposition they coagulate into films and rivulets which are then drawn towards the trailing edge of the blade due to viscous drag of the steam. These large droplets in the range of radius 100 μm are accelerated by steam until they impact on the next blade row causing erosion. The two phenomenon responsible for deposition are inertial impaction and turbulent-diffusion. This work shall discuss the deposition mechanism in steam turbine in detail and numerically model and validate with practical data.