Detection of Epilepsy with a Commercial EEG Headband 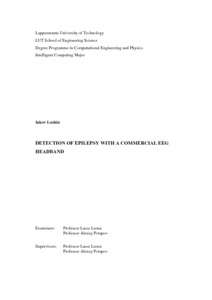 Epilepsy is a chronic brain disorder, characterized by reoccurring seizures. Automatic sei-zure detector, incorporated into a mobile closed-loop system, can improve the quality of life for the people with epilepsy. Commercial EEG headbands, such as Emotiv Epoc, have a potential to be used as the data acquisition devices for such a system. In order to estimate that potential, epileptic EEG signals from the commercial devices were emulated in this work based on the EEG data from a clinical dataset. The emulated characteristics include the referencing scheme, the set of electrodes used, the sampling rate, the sample resolution and the noise level. Performance of the existing algorithm for detection of epileptic seizures, developed in the context of clinical data, has been evaluated on the emulated commercial data. The results show, that after the transformation of the data towards the characteristics of Emotiv Epoc, the detection capabilities of the algorithm are mostly preserved. The ranges of acceptable changes in the signal parameters are also estimated.