Investigation of adsorption of dyes onto modified titanium dioxide 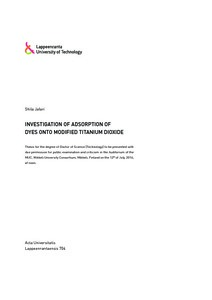 Titanium dioxide (TiO2) nanoparticles with different sizes and crystalloid structures
produced by the thermal method and doped with silver iodide (AgI), nitrogen (N), sulphur
(S) and carbon (C) were applied as adsorbents. The adsorption of Methyl Violet (MV),
Methylene Blue (MB), Methyl Orange (MO) and Orange II on the surface of these
particles was studied. The photocatalytic activity of some particles for the destruction of
MV and Orange II was evaluated under sunlight and visible light. The equilibrium
adsorption data were fitted to the Langmuir, Freundlich, Langmuir-Freundlich and
Temkin isotherms. The equilibrium data show that TiO2 particles with larger sizes and
doped with AgI, N, S and C have the highest adsorption capacity for the dyes. The kinetic
data followed the pseudo-first order and pseudo-second order models, while desorption
data fitted the zero order, first order and second order models. The highest adsorption rate
constant was observed for the TiO2 with the highest anatase phase percentage. Factors
such as anatase crystalloid structure, particle size and doping with AgI affect the
photocatalytic activity significantly. Increasing the rutile phase percentage also decreases
the tendency to desorption for N-TiO2 and S-TiO2. Adsorption was not found to be
important in the photocatalytic decomposition of MV in an investigation with differently
sized AgI-TiO2 nanoparticles. Nevertheless C-TiO2 was found to have higher adsorption
activity onto Orange II, as the adsorption role of carbon approached synchronicity with
the oxidation role.