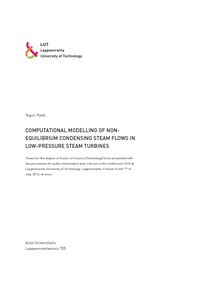 The steam turbines play a significant role in global power generation. Especially, research
on low pressure (LP) steam turbine stages is of special importance for steam turbine man-
ufactures, vendors, power plant owners and the scientific community due to their lower
efficiency than the high pressure steam turbine stages. Because of condensation, the last
stages of LP turbine experience irreversible thermodynamic losses, aerodynamic losses
and erosion in turbine blades. Additionally, an LP steam turbine requires maintenance
due to moisture generation, and therefore, it is also affecting on the turbine reliability.
Therefore, the design of energy efficient LP steam turbines requires a comprehensive
analysis of condensation phenomena and corresponding losses occurring in the steam tur-
bine either by experiments or with numerical simulations. The aim of the present work
is to apply computational fluid dynamics (CFD) to enhance the existing knowledge and
understanding of condensing steam flows and loss mechanisms that occur due to the irre-
versible heat and mass transfer during the condensation process in an LP steam turbine.
Throughout this work, two commercial CFD codes were used to model non-equilibrium
condensing steam flows. The Eulerian-Eulerian approach was utilised in which the mix-
ture of vapour and liquid phases was solved by Reynolds-averaged Navier-Stokes equa-
tions. The nucleation process was modelled with the classical nucleation theory, and two
different droplet growth models were used to predict the droplet growth rate. The flow
turbulence was solved by employing the standard k-ε and the shear stress transport k-ω
turbulence models. Further, both models were modified and implemented in the CFD
codes. The thermodynamic properties of vapour and liquid phases were evaluated with
real gas models.
In this thesis, various topics, namely the influence of real gas properties, turbulence mod-
elling, unsteadiness and the blade trailing edge shape on wet-steam flows, are studied with
different convergent-divergent nozzles, turbine stator cascade and 3D turbine stator-rotor
stage. The simulated results of this study were evaluated and discussed together with the
available experimental data in the literature. The grid independence study revealed that
an adequate grid size is required to capture correct trends of condensation phenomena in
LP turbine flows. The study shows that accurate real gas properties are important for the
precise modelling of non-equilibrium condensing steam flows. The turbulence modelling
revealed that the flow expansion and subsequently the rate of formation of liquid droplet nuclei and its growth process were affected by the turbulence modelling. The losses were
rather sensitive to turbulence modelling as well. Based on the presented results, it could
be observed that the correct computational prediction of wet-steam flows in the LP turbine
requires the turbulence to be modelled accurately. The trailing edge shape of the LP
turbine blades influenced the liquid droplet formulation, distribution and sizes, and loss
generation. The study shows that the semicircular trailing edge shape predicted the smallest
droplet sizes. The square trailing edge shape estimated greater losses. The analysis
of steady and unsteady calculations of wet-steam flow exhibited that in unsteady simulations,
the interaction of wakes in the rotor blade row affected the flow field. The flow
unsteadiness influenced the nucleation and droplet growth processes due to the fluctuation
in the Wilson point.