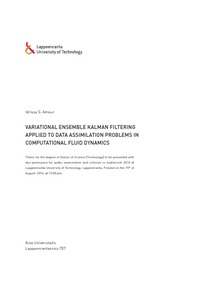 One challenge on data assimilation (DA) methods is how the error covariance for the model state is computed. Ensemble methods have been proposed for producing error covariance estimates, as error is propagated in time using the non-linear model. Variational methods, on the other hand, use the concepts of control theory, whereby the state estimate is optimized from both the background and the measurements. Numerical optimization schemes are applied which solve the problem of memory storage and huge matrix inversion needed by classical Kalman filter methods. Variational Ensemble Kalman filter (VEnKF), as a method inspired the Variational Kalman Filter (VKF), enjoys the benefits from both ensemble methods and variational methods. It avoids filter inbreeding problems which emerge when the ensemble spread underestimates the true error covariance. In VEnKF this is tackled by resampling the ensemble every time measurements are available. One advantage of VEnKF over VKF is that it needs neither tangent linear code nor adjoint code. In this thesis, VEnKF has been applied to a two-dimensional shallow water model simulating a dam-break experiment. The model is a public code with water height measurements recorded in seven stations along the 21:2 m long 1:4 m wide flume’s mid-line. Because the data were too sparse to assimilate the 30 171 model state vector, we chose to interpolate the data both in time and in space. The results of the assimilation were compared with that of a pure simulation. We have found that the results revealed by the VEnKF were more realistic, without numerical artifacts present in the pure simulation. Creating a wrapper code for a model and DA scheme might be challenging, especially when the two were designed independently or are poorly documented. In this thesis we have presented a non-intrusive approach of coupling the model and a DA scheme. An external program is used to send and receive information between the model and DA procedure using files. The advantage of this method is that the model code changes needed are minimal, only a few lines which facilitate input and output. Apart from being simple to coupling, the approach can be employed even if the two were written in different programming languages, because the communication is not through code. The non-intrusive approach is made to accommodate parallel computing by just telling the control program to wait until all the processes have ended before the DA procedure is invoked. It is worth mentioning the overhead increase caused by the approach, as at every assimilation cycle both the model and the DA procedure have to be initialized. Nonetheless, the method can be an ideal approach for a benchmark platform in testing DA methods. The non-intrusive VEnKF has been applied to a multi-purpose hydrodynamic model COHERENS to assimilate Total Suspended Matter (TSM) in lake Säkylän Pyhäjärvi. The lake has an area of 154 km2 with an average depth of 5:4 m. Turbidity and chlorophyll-a concentrations from MERIS satellite images for 7 days between May 16 and July 6 2009 were available. The effect of the organic matter has been computationally eliminated to obtain TSM data. Because of computational demands from both COHERENS and VEnKF, we have chosen to use 1 km grid resolution. The results of the VEnKF have been compared with the measurements recorded at an automatic station located at the North-Western part of the lake. However, due to TSM data sparsity in both time and space, it could not be well matched. The use of multiple automatic stations with real time data is important to elude the time sparsity problem. With DA, this will help in better understanding the environmental hazard variables for instance. We have found that using a very high ensemble size does not necessarily improve the results, because there is a limit whereby additional ensemble members add very little to the performance. Successful implementation of the non-intrusive VEnKF and the ensemble size limit for performance leads to an emerging area of Reduced Order Modeling (ROM). To save computational resources, running full-blown model in ROM is avoided. When the ROM is applied with the non-intrusive DA approach, it might result in a cheaper algorithm that will relax computation challenges existing in the field of modelling and DA.