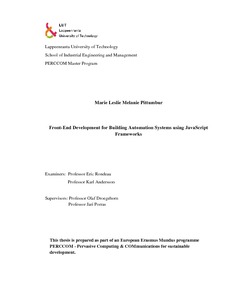 Automation technologies are widely acclaimed to have the potential to significantly
reduce energy consumption and energy-related costs in buildings. However, despite the
abundance of commercially available technologies, automation in domestic environments keep on meeting commercial failures. The main reason for this is the development process that is used to build the automation applications, which tend to focus more on technical aspects rather than on the needs and limitations of the users. An instance of this problem is the complex and poorly designed home automation front-ends that deter customers from investing in a home automation product. On the other hand, developing a usable and interactive interface is a complicated task for developers due to the multidisciplinary challenges that need to be identified and solved. In this context, the current research work investigates the different design problems associated with developing a home automation interface as well as the existing design solutions that are applied to these problems. The Qualitative Data Analysis approach was used for collecting data from research papers and the open coding process was used to cluster the findings. From the analysis of the data collected, requirements for designing the interface were derived. A home energy management functionality for a Web-based home automation front-end was developed as a proof-of-concept and a user evaluation was used to assess the usability of the interface. The results of the evaluation showed that this holistic approach to designing interfaces improved its usability which increases the chances of its commercial success.