Performance Analysis of IP based WSNs in real time systems 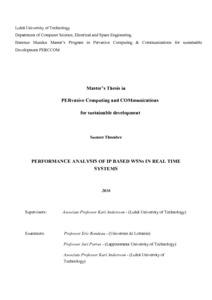 Wireless sensor networks (WSNs) are the key enablers of the internet of things (IoT) paradigm. Traditionally, sensor network research has been to be unlike the internet, motivated by power and device constraints. The IETF 6LoWPAN draft standard changes this, defining how IPv6 packets can be efficiently transmitted over IEEE 802.15.4 radio links. Due to this 6LoWPAN technology, low power, low cost micro- controllers can be connected to the internet forming what is known as the wireless embedded internet. Another IETF recommendation, CoAP allows these devices to communicate interactively over the internet. The integration of such tiny, ubiquitous electronic devices to the internet enables interesting real-time applications. This thesis work attempts to evaluate the performance of a stack consisting of CoAP and 6LoWPAN over the IEEE 802.15.4 radio link using the Contiki OS and Cooja simulator, along with the CoAP framework Californium (Cf). Ultimately, the implementation of this stack on real hardware is carried out using a raspberry pi as a border router with T-mote sky sensors as slip radios and CoAP servers relaying temperature and humidity data. The reliability of the stack was also demonstrated during scalability analysis conducted on the physical deployment. The interoperability is ensured by connecting the WSN to the global internet using different hardware platforms supported by Contiki and without the use of specialized gateways commonly found in non IP based networks. This work therefore developed and demonstrated a heterogeneous wireless sensor network stack, which is IP based and conducted performance analysis of the stack, both in terms of simulations and real hardware.