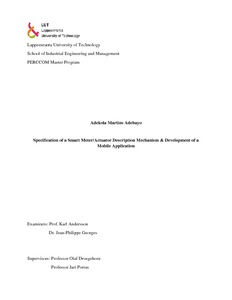 Home Automation holds the potential of realizing cost savings for end users while reducing the carbon footprint of domestic energy consumption. Yet, adoption is still very low. High cost of vendor-supplied home automation systems is a major prohibiting factor. Open source systems such as FHEM, Domoticz, OpenHAB etc. are a cheaper alternative and can drive the adoption of home automation. Moreover, they have the advantage of not being limited to a single vendor or communication technology which gives end users flexibility in the choice of devices to include in their installation. However, interaction with devices having diverse communication technologies can be inconvenient for users thus limiting the utility they derive from it. For application developers, creating applications which interact with the several technologies in the home automation systems is not a consistent process. Hence, there is the need for a common description mechanism that makes interaction smooth for end users and which enables application developers to make home automation applications in a consistent and uniform way. This thesis proposes such a description mechanism within the context of an open source home automation system – FHEM, together with a system concept for its application. A mobile application was developed as a proof of concept of the proposed description mechanism and the results of the implementation are reflected upon.