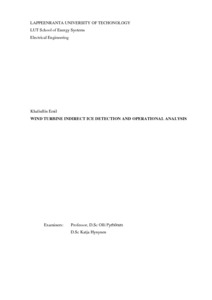 Wind energy is one of the most promising and fast growing sector of energy production. Wind is ecologically friendly and relatively cheap energy resource available for development in practically all corners of the world (where only the wind blows). Today wind power gained broad development in the Scandinavian countries. Three important challenges concerning sustainable development, i.e. energy security, climate change and energy access make a compelling case for large-scale utilization of wind energy. In Finland, according to the climate and energy strategy, accepted in 2008, the total consumption of electricity generated by means of wind farms by 2020, should reach 6 - 7% of total consumption in the country [1].
The main challenges associated with wind energy production are harsh operational conditions that often accompany the turbine operation in the climatic conditions of the north and poor accessibility for maintenance and service. One of the major problems that require a solution is the icing of turbine structures. Icing reduces the performance of wind turbines, which in the conditions of a long cold period, can significantly affect the reliability of power supply. In order to predict and control power performance, the process of ice accretion has to be carefully tracked. There are two ways to detect icing – directly or indirectly. The first way applies to the special ice detection instruments. The second one is using indirect characteristics of turbine performance. One of such indirect methods for ice detection and power loss estimation has been proposed and used in this paper. The results were compared to the results directly gained from the ice sensors. The data used was measured in Muukko wind farm, southeast Finland during a project 'Wind power in cold climate and complex terrain'. The project was carried out in 9/2013 - 8/2015 with the partners Lappeenranta university of technology, Alstom renovables España S.L., TuuliMuukko, and TuuliSaimaa.