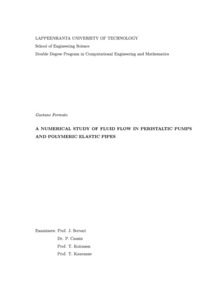 This thesis work deals with a mathematical description of flow in polymeric pipe and in
a specific peristaltic pump. This study involves fluid-structure interaction analysis in
presence of complex-turbulent flows treated in an arbitrary Lagrangian-Eulerian (ALE)
framework. The flow simulations are performed in COMSOL 4.4, as 2D axial symmetric
model, and ABAQUS 6.14.1, as 3D model with symmetric boundary conditions. In
COMSOL, the fluid and structure problems are coupled by monolithic algorithm, while
ABAQUS code links ABAQUS CFD and ABAQUS Standard solvers with single block-iterative partitioned algorithm. For the turbulent features of the flow, the fluid model
in both codes is described by RNG k-ϵ. The structural model is described, on the
basis of the pipe material, by Elastic models or Hyperelastic Neo-Hookean models with
Rayleigh damping properties.
In order to describe the pulsatile fluid flow after the pumping process, the available
data are often defective for the fluid problem. Engineering measurements are normally
able to provide average pressure or velocity at a cross-section. This problem has been
analyzed by McDonald's and Womersley's work for average pressure at fixed cross
section by Fourier analysis since '50, while nowadays sophisticated techniques including
Finite Elements and Finite Volumes exist to study the flow.
Finally, we set up peristaltic pipe simulations in ABAQUS code, by using the same
model previously tested for the fl uid and the structure.