The MENA and North America super grid towards 100% renewable energy power supply by 2030, with specific focus on Iran as a case study and compressed air energy storage as a storage technology 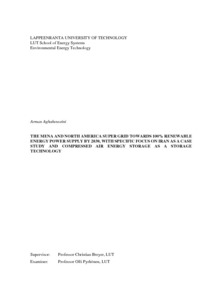 The main objective of this thesis is to analyze a 100% renewable energy (RE)-based system for the MENA region and North America in an hourly resolution model for the year 2030 and to evaluate their results from different perspectives. These two regions have an excellent potential of RE resources, particularly solar and wind energy, which can evolve to be the main future energy sources. In addition, the costs of RE are expected to decrease relative to conventional energy sources, making a transition to RE across the regions economically feasible. Four scenarios have been evaluated according to different high voltage direct current (HVDC) transmission grid development levels, including a region-wide, country-wide, area-wide and integrated scenario. In the first two scenarios, RE generation and energy storage technologies cover the region’s and country’s power sector electricity demand. The area-wide scenario is the same as region-wide scenario, but in which the region-wide energy systems are interconnected. In the integrated scenario, which consists of industrial gas production and reverse osmosis water desalination demand, integration of new sectors provides the system with required flexibility and increases the efficiency of the usage of storage technologies. Given a reliable fuel source, RE powered by solar PV and wind energy appear to be the favorable option for all the regions due to their higher potential and lower levelized cost of electricity (LCOE). The thesis is also focused on Iran as a case study. The same approach for two abovementioned regions has been applied for the case of Iran and the results clearly reveal that a 100% RE system for the country is feasible and a real policy option. It has been estimated that RE technologies can generate sufficient energy to fulfil all electricity demand in Iran by the year 2030 at a price level of 40.3 – 45.3 €/MWhel, depending on the sectoral integration. A deeply research has been carried out for one of the storage technologies used in the energy system optimization called adiabatic compressed air energy storage (A-CAES). The impact of A-CAES has been applied for Eurasia, Southeast Asia and the Pacific Rim in more detail. The results indicate that for the region-wide scenario in Southeast Asia (region with low seasonal variation and lower supply share of wind energy) the share of A-CAES output is 1.9% in comparison to Eurasia (region with high seasonal variation and a high supply share of wind energy) which has 28.6%. The other impact which was observed was the distribution of the storage technologies after A-CAES integration, since battery output and Power-to-Gas (PtG) output were decreased by 72.9% and 21.6% (Eurasia) and 5.5% and 1.6% (Southeast Asia), respectively. However, a large scale grid integration reduces the demand for A-CAES storage drastically and partly even to zero due to substitution by grids. As a result, the most valuable application for A-CAES seems to be in rather decentralized or nation-wide energy system designs and as a well-adapted storage for the typical generation profiles of wind energy.