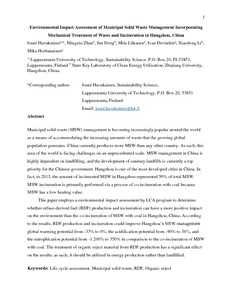 Municipal solid waste (MSW) management is becoming increasingly popular around the world
as a means of accommodating the increasing amounts of waste that the growing global
population generates. China currently produces more MSW than any other country. As such, this
area of the world is facing challenges on an unprecedented scale. MSW management in China is
highly dependent on landfilling, and the development of sanitary landfills is currently a top
priority for the Chinese government. Hangzhou is one of the most developed cities in China. In
fact, in 2013, the amount of incinerated MSW in Hangzhou represented 56% of total MSW.
MSW incineration is primarily performed via a process of co-incineration with coal because
MSW has a low heating value.
This paper employs a environmental impact assessment by LCA program to determine
whether refuse-derived fuel (RDF) production and incineration can have a more positive impact
on the environment than the co-incineration of MSW with coal in Hangzhou, China. According
to the results, RDF production and incineration could improve Hangzhou’s MSW management
global warming potential from -33% to 0%, the acidification potential from -90% to 34%, and
the eutrophication potential from -1 200% to 350% in comparison to the co-incineration of MSW
with coal. The treatment of organic reject material from RDF production has a significant effect
on the results; as such, it should be utilized in energy production rather than landfilled.