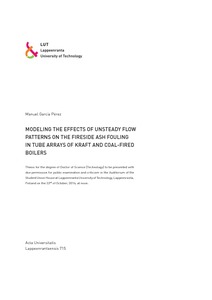 The modeling of ash deposition trends, rates, and shapes has been the target of numerous
investigations since slagging and fouling constitute a major penalizing factor in boiler
performance. Also, they are the most usual cause of unscheduled downtimes.
Unfortunately, the ash deposition is a rather challenging phenomenon to model due to its
complicated and multidisciplinary nature which may combine complex species chemistry
(ash aerosol formation), mineralogy, ash particle drag and impaction mechanics, and fluid
dynamics. This motivates the research of ash deposition models.
Ash deposition issues can be studied by using computational fluid dynamics (CFD).
These tools are particularly attractive due to their versatility, although their current stateof-
the-art is still somewhat inaccurate and qualitative, as it has been pointed out by some
authors. It is certainly challenging and ambitious to achieve satisfactory fouling
predictions. This thesis presents a CFD model for ash deposition trends and deposit shape
predictions. The model has been used with the aim to explain relevant fouling phenomena
in kraft and coal-fired boilers. Special care has been taken regarding an accurate solving
of the flow patterns around tube arrays and on the necessary grid resolution for proper
discrete particle trajectory tracking. The necessity for unsteady flow simulation is
emphasized, remarked and justified due to the swinging flow patterns.
The model validity was tested with some experimental work. The challenges which arose
regarding the implementation and determination of the original phenomena are pointed
out and detailed, as well as a comparison between the experimental and modeled results.
Especially, a proper determination of the thermal conductivity and the solid fraction or
porosity of the deposits are essential for reliable model results.
Thermophoresis was found to be the main impaction mechanism for submicron
particulate. On the other hand, it becomes negligible for larger particles (from 3 microns
and larger) whose arrival rates are mainly influenced by inertial impaction. In addition,
the importance of accurate flow solving was remarked by non-uniform distributions of
particle sticking efficiency and arrival rates around the tube perimeters. The self-limiting
nature of fouling (i.e., fouling rates tend to decrease with the time) is briefly quantified
and explained. The deposit growth over relatively long fouling times is simulated and
studied with the usage of dynamic mesh routines.