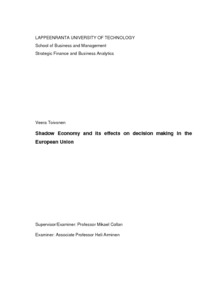 The aim of this work is to find out how the countries of the European Union apply shadow economy in to their key economic figures, how the inclusion could affect those figures and how this affects to the decisions they make based on those economic figures. The work is done by examining Gross Domestic Product and shadow economy’s part in it.
It was noticed that even though there are regulations concerning the calculation of national accounts, the inclusion of shadow economy differs still among countries. This leads to the fact, that if every country would include shadow economy in to their figures, these figures would change a lot at least for starters. Gross Domestic Product is widely used to compare economies and considering shadow economy as a part of it can have a significant affect in those comparisons.