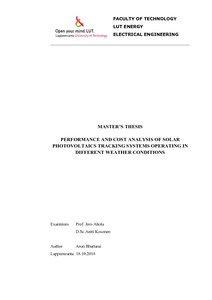 Nowadays, installation of solar photovoltaic systems is growing due to awareness
in renewable energy and decreasing the cost of solar panels and batteries. Solar
tracking system capture 5 to 50 percent more solar radiation compare to fixed tilted
system.
The main objective of this thesis is to evaluate the performance of various tracking
system compared with fixed tilted system for in Finnish weather conditions. This
target was achieved by simulating and analysing with the help of PVSOL pro and
Homer simulation software in different orientations of PV systems: Fixed optimally
tilted, horizontal axis east-west, horizontal axis north-south, horizontal axis
north-south optimally tilted, vertical axis optimally tilted and dual axis system.
Three countries having different latitude angle and weather conditions: Lappeenranta
(Finland), Kathmandu (Nepal) and Kisumu (Kenya) have been studied.
The results show that dual axis system has the best performance. In case of single
axis tracking system, vertical axis optimally tilted and horizontal axis north south
optimally tilted system have the best performance for Lappeenranta (Finland) having
high latitude angle. In case of Kisumu (Kenya), located in equator need not to
be tilted for horizontal axis system.
In case of clear sky condition, it is good to track the solar radiation. Nevertheless,
during cloudy condition. Tracking system should be also good, because it tries to
find the best position. The ground reflected radiation increase according to tilted
angle. During three-spring months in northern countries like Finland reflection
from snow increase the irradiation from 4 to 8 percentage.
The installation cost of each solar tracking system is higher than fixed system.
Furthermore, operating and maintenance cost would be higher due to moving parts
like bearing and motors. The cost of each tracking system is analyzed with
1.2€/Wp for a fixed 15 degree tilted system. Levelised cost of electricity was analyzed
for 20, 25 and 30 years lifetime with interest rates upto 10-percent. Additional
cost of each tracking system was calculated in order to maintain same levelised
cost of electricity as fixed 15 degree tilted system. If the additional costs of
tracking systems are higher than the calculated value, the system is considered as
too expensive for that location.