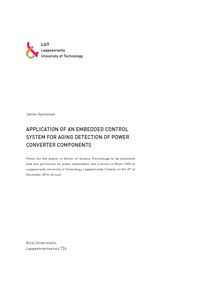 In modern power conversion applications, the converter fault tolerance and the reliability
of a power supply have become key requirements. Condition monitoring of power supplies
has been suggested to support these reliability-related requirements in order to indicate and
predict an imminent fault resulting from known precursors of component aging. By implementing
the power supply control with programmable controllers, enhanced design flexibility
and higher integration can be achieved when compared with traditional analog and distributed
control systems. In addition, an embedded control system enables condition monitoring to be
used in parallel with its main purpose, system control.
In this doctoral dissertation, one solution to digital control implementation for an AC/DC
power supply is proposed. The digital control system is applied to condition monitoring in
three approaches, the first of which uses a state observer and the two latter output voltage
excitations in order to detect aging precursors. The condition monitoring applications only
exploit those measurements that are also used for the system control, and thus, no changes to
the system hardware are required. The study focuses on analyzing the feasibility of the alternative
approaches to detect the converter output stage capacitor aging. In addition, detection
of increased losses in the converter main circuit is investigated by taking the state observer approach.
Each method is tested experimentally as a proof of concept by using the power supply prototype.
In the tests, the methods are studied applying artificially generated variations in the
components, which are considered to emulate the component aging during the converter lifetime.
Thus, the results set a basis for further research on the feasibility of the methods in
actual converter aging tests. In addition to the feasibility study, the burden caused by each
method on the microcontroller processing resources is assessed.