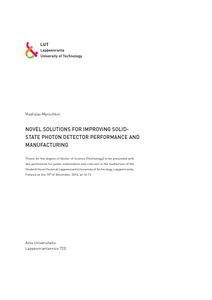 Radiation is all around us and most of the time we are not able to see it, nevertheless it
brings us valuable information about the world we live in, so it is very important to be
able to detect it with high accuracy. This thesis explores the ways and brings solutions of
improving performance and manufacturing of solid-state radiation detectors which are
used for detecting photons (electromagnetic radiation) within various energy ranges:
near-infrared light, visible light, ultraviolet light, x-ray and gamma radiation.
Solid-state radiation detectors have been under active development during the last 30
years. The development has been driven by needs of better spatial and energy resolution,
higher readout speeds, and higher particle densities in fields and applications dealing with
photon detection.
Radiation detectors have been evolving as new technologies were becoming available, as
a result, more and more sophisticated detectors and systems of detectors were made
available.
Nowadays, semiconductor detectors are used in a large variety of fields: science,
including nuclear physics, elementary particle physics, optical and x-ray astronomy, material testing; medicine, image sensors, technology and consumer applications. The
number of applications grows continually.
There is a constant demand for solid-state radiation detector performance improvement
from all the fields where they are used. The performance of a solid-state detector has
improved significantly for last 30 years and nowadays there are many various concepts
of a solid-state detector which are used in various applications: pin-photodiode, silicon
drift detector, depleted p-channel field-effect transistor, charge coupled device, etc. But
there is still room for improvement.
The goal of this work was to address known challenges and improve performance and
manufacturability of solid-state radiation detectors.
As a result, several new concepts of solid-state detectors were developed. Performance
of new structures was verified by 2D and 3D process and device simulations in
Technology Computer Aided Design (TCAD) software. Proposed concepts considerably
improve performance of solid-state radiation detectors in terms of removing issues with
interface generated dark noise, reducing interface generated 1/f noise, reducing interface
generated Random Telegraph Signal, improving quantum efficiency, reducing cross-talk,
and improving signal-to-noise ratio. Developed concepts also make manufacturing of
radiation-detectors easier since for most of the concepts a standard CMOS process can be
used. Another valuable feature is a possibility of using another semiconductor materials,
like for example germanium for manufacturing the same radiation detectors which was
not possible previously due to interface related issues.