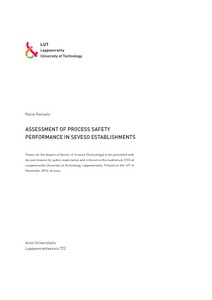 This study was begun within Tukes, The Finnish Safety and Chemicals Agency, in 2009 with the purpose of observing the effective process safety procedures used by operators and authorities in other European countries. For the study, a group of inspectors visited nine establishments belonging to three companies in seven countries. The agenda for the visits was based on the inspection agenda of Finnish Seveso establishments: recognition of the requirements of legislation, management and personnel commitment, risk assessment and management of change, identification of safety requirements, emergency preparedness and site tour. The establishments were also assessed based on the current scoring system used by Tukes. The aim of the study was to deepen knowledge of inspection procedures within Tukes and develop process safety in Finland.
The companies which participated this study were known to have high safety levels. The establishments visited in Finland were mainly chosen based on the inspection schedules of Tukes, while those visited in other countries were chosen by the companies concerned. As a result, the visited establishments cannot be considered representative of all Seveso establishments. If the companies and establishments had been randomly chosen, this would probably have had an effect on the comparative results.
The visiting group made no observations of serious or significant deficiencies, but many good practices were noted which could be applied in other establishments. There were differences in safety procedures between the companies, even if they have common safety management systems and policies in place. The study also included observations on the differences between the authorities and their practices, and the requirements placed on establishments. The visiting group gave scores to each establishment based on the scoring system used in Finnish inspections. These scores can be used to compare safety levels between establishments based on a range of seven topics. The scores given ranged between 2 and 4.5 (scale 0–5), while the total average score given to establishments varied little, ranging from 3.1 to 4.1.
When analysing the results of the study, ideas were formed on how Tukes’ scoring system might be developed. The system has been in use since 2005 and has a range of positive aspects. For the purposes of this study, the current scoring system has therefore been used as a basis for the newly developed system. The greatest change between the current and the new system lies in the fact that the new scoring system includes several detailed questions under each topic (67 questions in total), all of which are given their own score. The average score for each topic can still be calculated and used in the same way as in the current system, even though the scale has been changed from an elevenstep -scale to a four-step -scale. The new system was tested by Tukes inspectors in five inspections conducted in 2013–2014. In each case, the testing was performed by a pair of inspectors who mainly gave their scores independently. In all five test inspections, the developed scoring system was also tested as a self-assessment tool by the establishments.
Although the testing of the new scoring system revealed that many aspects are still in need of development, the system received positive feedback from the inspectors testing it. A total of 335 questions were presented during the test inspection, of which 67% were answered by both inspectors. Of the questions answered, 77% comprised identical answers. The number of questions answered by both the inspectors and self-assessors varied between 24 and 59. The self-assessors agreed with the inspectors in the case of 33%–82% of the questions answered. Self-assessment constituted a completely new system for the establishments, which were not provided with any guidance or training the use of the new system.
The new scoring system provides establishments with more information in the form of more detailed questions with the related answers. For new inspectors, the developed scoring system is easier to learn than the current one, due to its more precise questions and more clearly defined scale.
The questions require more development before the adoption of the new scoring system in inspections by Tukes. There is also a need for a guide and orientation for the inspectors on how to use the system. In particular, if the system is used as a selfassessment tool, there is a need for a guide on how to answer the questions. For Tukes, use of a self-assessment tool would represent a new way of co-operating with inspected establishments. It can be assumed that the extent of unanimity achieved among inspectors and between self-assessors and inspectors will increase due to the test inspections.
If Tukes renews its scoring system, it would be wise to renew the entire reporting system for inspections at the same time; e.g. inspection reports could be lighter and the scoring table could be included as an appendix.