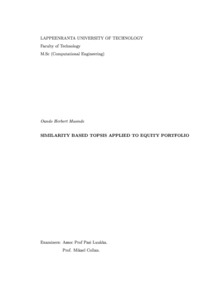 The aim of this thesis is to study applicability of similarity based TOPSIS to equity portfolios. Average annual returns are a basis to analyze portfolios. They are annually computed at same time for all financial ratios by applying similaritybased TOPSIS. To form the ratios, financial values P, B, Ev, Ebit, E, S and Ebitdaare selected from data set quoted on main list of Helsinki stock exchange (HEX) for
period 1996-2012. They are chosen because from those values one can form widely
used financial ratios. The following financial ratios; EV/Ebit, P/B, P/S, P/E and
EV/Ebitda are formed out of the values. Any two of these ratios are joined to form a
combination. Since similarity based TOPSIS is multiple criteria decision making, by
combining two of the ratios, we examine whether combinations of these ratios bring
added value compared to using a single financial ratio. Ranking is done according
to closeness coefficient computed from similarity based TOPSIS and five equal size
portfolios simultaneously. Portfolios are formed by dividing ranked companies into
about equal size sets.

Results obtained generally indicate that 1st portfolios have highest average annual
returns while 5th portfolios have the lowest. Similarly best performing portfolios
occur when p-values are less than 1, implying that reducing p-values greatly improved
performance of portfolios. Specifically combination (EV/Ebit, P/E) has highest
average annual returns of 15.71 and corresponding p-value of 0.75. This average
annual return is higher than 15.29 for (EV/Ebit) which was the best single ratio. Another interesting comparison is that combination (EV/Ebit, EV/Ebitda) has
highest difference between 1st portfolio returns and 5th portfolio returns of 14.49
which is higher than 13,73 for EV/Ebit the highest single ratio difference. Hence
we can note that there is added value to use similarity based TOPSIS.
The above results are in conformity with critical objectives of the study that; using
two criteria instead of one brings added value since higher average returns have
been gained this way and also that difference between 1st portfolio returns and 5th
portfolio returns is higher when we use combinations of ratios as compared to single
financial ratios.
Therefore, similarity based TOPSIS approach is practically robust and efficient in
analysing portfolios.