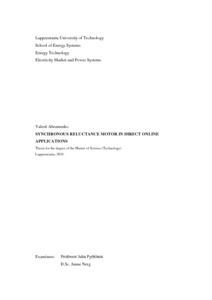 Synchronous reluctance motor (SynRM) with transversally laminated anisotropic (TLA) rotor equipped with damper winding (DW) for direct online operation is studied in the thesis. The stator used in the SynRM is the same as in a 30 kW, 3-phase, 4-pole induction motor (IM).
Matlab, Simulink software has been used for the investigation of the approximate performance and DW influence on the starting process. Verification of Matlab results has been implemented in FEM-software Flux 2D. A method for the calculation of the resistances RD and RQ by FEM is proposed. The influence of DW geometry on the starting process has been studied. The results show that the best starting performance is achieved with flux barriers filled with aluminium. The possibility of the motor sticking near half of the rated speed while starting due to Gerges’s effect has been studied. In this regard Gerges’s effect can significantly affect the starting process when the amount of aluminium along q-axis is relatively small.
Competitive analysis with IM is done. High performance SynRM equipped with DW can compete and exceed IM in efficiency in DOL applications.