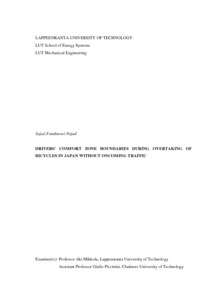 After the great earthquake in 2011, the number of bicycles owners in Japan increased significantly and the use of bicycles is getting popular to go to work and school. Although bicycles are non-motorized vehicles and there are several advantages in using bikes (for example, health and environmental benefits), in 2015, cyclists faced 109,269 accidents and 542 fatalities. Several crashes occurred in rural areas where there was no bicycle path and the collisions happened when a motorized vehicle overtook a slower bike. A number of studies were carried out on this topic, but more research is needed to assess the comfort zone boundaries during drivers’ overtaking of cyclists in order to support the design of autonomous vehicles. A driving simulator study was conducted with 37 participants at the University of Tsukuba in Japan. The participants were divided into two groups of age (standard drivers: 25-40 years old; elderly drivers: 65-75 years old) and two groups of gender (22 males and 15 females). The results show statistically significant differences between standard and elderly drivers only for comfort zone boundaries (CZB)1 in overtaking maneuver 2 (small effect size) and statistically significant differences between male and female drivers. However the significant differences between naturalistic versus driving simulator study was only in CZB1 (large effect size) and CZB4 (small effect size).