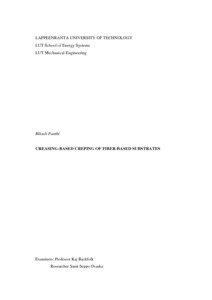 The overall objectives of this project were to find out if fiber-based materials could be creped by creasing process and to design creping patterns that affect the material elongation. Special attention was paid to the difference in the ratio of strain-at-break values between machine and cross direction of paper and paperboard. Scientific principles were used to design the creping pattern.
Various techniques were used to analyze the physical and mechanical properties of the creped substrates. In order to analyze the creped samples, microscopic analysis was performed to find the cracks in the substrates. Likewise, tensile strength, bending stiffness, tear strength and grease barrier experiments were performed.
Thickness and density were reported in the initial phase of the thesis project. Copy paper performed well, because it was thin and rather dense. However, thick and bulky paperboards were trickier since the force the creasing table produced was limited and probably more force would have been needed for more rigid materials such as three-layer paperboard. The ratio between machine and cross directional elongation (strain ratio) as well as percentual changes in strain at break were reported in the result. It was found that creping made the strain properties of plastics-coated materials more heterogeneous, which suggests that the paperboard should be creped before coating with plastics.