Control of a mobile robot by a noninvasive brain-computer interface 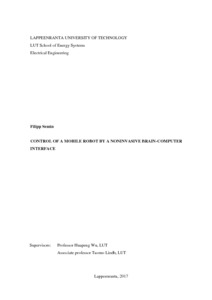 In this work, an EEG-based brain-computer interface (BCI) and a mobile robot software were developed for a BCI mobile robot control application. A common spatial pattern (CSP) was applied to the recorded EEG signal filtered with a 5th order Butterworth filer and then the following features were extracted from the surrogate channels: CSP variance, Katz fractal dimension measure, Kolmogorov entropy, and Matched filter output. The Butterworth filter band frequencies, as well as the Matched filter template were optimized using a genetic algorithm. The features were classified between two classes “Go” and “No go” using a feedforward neural network.