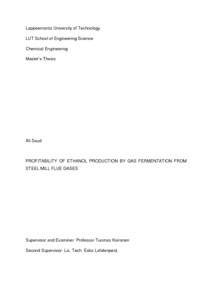 The aim of this master’s thesis was to study processing of syngas by gas fermentation for the conversion of steel mill waste gases into ethanol. At first, the process was studied through literature review which involves in designing of preliminary process. Gas fermentation is the novel technology which can convert industrial waste gases into commodity chemicals and fuels. Microorganisms such as Clostridium ljungdahlii and Clostridum autoethanogenum have the capability to convert gases into ethanol and acetic acid as a major side product. The conversion through microorganisms depend on the selectivity, growth medium and configuration of the reactor. In the process evaluation, syngas composition was received from Outokumpu Steel Mills, Tornio which had 86% CO, 4% H2, 5% CO2 and 5% N2 from three submerged arc furnace. The total flow rate was 32000 Nm3/hr which will generate 5667 kg/hr of ethanol. The gas was at 10 °C and it was compressed to 3 bar. The temperature in the airlift bioreactor was 39 °C as bacteria can withstand only in the range of 36 – 40°C. The nutrient media and bacteria was cultivated in the separate tank. The compressed stream of syngas and bacteria along with nutrient media was entered in the reactor. The mass transfer coefficient was adjusted to 36 hr-1 and selectivity basis was also considered for reactions. The vent gases were exhausted in the atmosphere. The fermentation broth was then transferred to distillation column where 83% ethanol was separated from top and acetic acid with bacteria was separated from bottom. The waste stream includes acetic acid, bacteria and water. Acetic acid and bacteria was
sent to waste and water was reused again in the process. ASPEN Plus software was used for simulations. The results obtained from simulations were used for economic evaluation of the process. The production rate was achieved 6428 tons/year by keeping ethanol concentration less than 6% in recovered water stream. The revenue would be 3300 k€ at a price of 520 € per ton of ethanol. The payback period would be 6 years with return of investment at 11.8%. The total production cost was estimated 2480 k€ and annual gross profit would be 770 k€. In conclusions, the process is profitable but the changing prices of ethanol and emerging of new research for renewable fuels will highly effect it. The prices were taken keeping in consideration that higher production rate will reduce cost but on the other hand more production of ethanol globally will also have to effect market prices. The vent gas stream was high in this process but it can be used either to generate electricity or to reuse in the process.