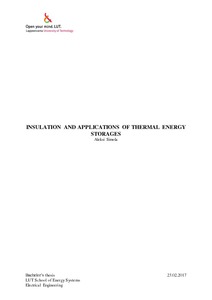 The use of wind and solar energy sources is increasing rapidly and because of their varying power production values, balancing supply and demand of the electricity consumption has become an area of research. For this several different energy storages have been invented. Their use is not limited to electricity generation and they have varying advantages and disadvantages. The purpose of this study is to research thermal energy storages and compare them to different energy storages by cost, efficiency and power generation. The heat transfer fluids and filler materials used in thermal storages are discussed. Insulations are examined, while focusing on materials suitable for high temperatures. Heat losses and insulation properties of small scale thermal energy storage that uses solar salt as a phase change storage material was studied. The different insulation methods used for the experiment, where vacuum and expanded perlite in a vacuum. Due to the radiative heat losses T4 correlation with the temperature, the focus during the experiments was the radiative losses. One experiment was conducted with the annular gaps pressure lowered to 0.02 mbar and in the second experiment the annular gap was filled with expanded perlite and the pressure lowered to 0.02 mbar. During both experiments the solar salt was heated to around 320 °C and then cooled down to room temperature at a natural rate. The insulation capabilities were observed. The heat flux at 306.3 °C at the first experiment was 306.42 W/m2 , which was the main source of heat loss. At 80 °C the heat flux in the first experiment was 14.76 W/m2 . The second experiment with expanded perlite in the annular gap at 318 °C had the radiative thermal conductivity of 0.01010 W/(mK). At 80 °C the radiative thermal conductivity in the second experiment was 0.00344 W/(mK). It was observed that at lower temperatures, when the radiative heat loss is not dominant, the heat loss was reduced. In a thermal energy storage the choice of heat transfer fluid and the filler material is important for efficiency and cost. To prevent heat losses at high temperatures the insulation material that also reduces radiative heat loss is effective.