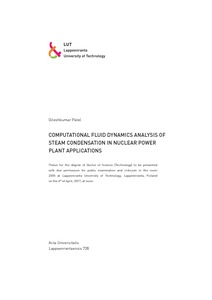 Detailed experimental and numerical investigations of safety systems and various key
components of nuclear power plant are important from both view points of safety and
economical aspects. This thesis presents the computational fluid dynamics (CFD) analysis
of steam condensation phenomena appearing in a pressure suppression pool (PSP) of a
boiling water reactor (BWR) and in a low-pressure (LP) steam turbine.
The PSP is one of the key systems which provide a large pressure and heat sink by condensing
steam into a denser volume of water. In this thesis, two direct contact condensation
(DCC) modes appearing during steam blowdown in BWR PSP are investigated. 2D
and 3D simulations of a PSP test facility were conducted by using the Eulerian-Eulerian
two-fluid approach. For this purpose, two CFD codes, OpenFOAM and NEPTUNE CFD
were used. The interfacial heat transfer between steam and water was modelled by using
different DCC models. The open pool test facility (POOLEX) and the pressurizing
drywell-wetwell suppression pool facility (PPOOLEX) tests of Lappeenranta University
of Technology (LUT) were used as references. Various issues namely performance of
DCC models, significance of reference bubble diameter, and sensitivity of subcooling
rate on DCC phenomena were studied. The results confirmed that the surface divergence
model by Lakehal et al. (2008) predicts the mildly sheared interfacial DCC case
well. The incompressible solver was not able to predict rapid pressure variation in chugging
simulations. The compressible two-phase solver of OpenFOAM was stable enough
and able to invoke the chugging phenomenon of POOLEX steam blowdown tests. The
surface renewal model of by Hughes and Duffey (1991) and the DCC model of Coste
(2004) achieved good predictions of the chugging simulations of the POOLEX test. The
influence of grid refinement on the DCC phenomena was assessed employing a grid convergence
index for POOLEX simulations. Results indicate that an adequate grid density
is essential to resolve the flow details and to acquire the correct rates of DCC. In the
PPOOLEX chugging simulations, different issues namely the performance of different
DCC models, the influence of turbulence modeling, interfacial momentum transfer, geometry
and interface initialization were briefly analyzed. The significance of interfacial
area modelling on the chugging DCC was examined by employing the Rayleigh-Taylor
Interfacial area model by Pellegrini et al. (2015). The results showed that interfacial area modeling and turbulence modelling were the dominant factors for the chugging DCC
modelling in the PPOOLEX simulations.
Steam turbines are vital for power generation, and therefore, the studies aiming to the
efficiency improvement of steam turbines are crucial for efficient power plants. As the
exhaust pressure of steam turbines is designed to be low to achieve the maximum energy
output, the steam temperature drops due to rapid expansion in the last stages of the LP
steam turbine. Steam condenses and, as a result, additional losses appear. The presence
of moisture in the LP turbine decreases the overall efficiency. This thesis was partially
aimed to study the non-equilibrium condensing steam flow in LP turbine by using the
ANSYS CFD codes. In all simulations, the mixture of vapour and liquid phases was
solved by employing Reynolds-averaged Navier-Stokes equations based on the Eulerian-
Eulerian approach. The classical nucleation theory was adopted to model nucleation process.
Droplet growth models were used to calculate the droplet growth rate. Throughout
this work, condensing steam flows were modelled with various computational domains
including convergent-divergent nozzles, a stationary cascade of turbine and 3D statorrotor
stage. The influence of local geometrical details of steam turbine blades including
blade trailing edge shapes, dimple inclusion and blade surface tapering on the flow expansion,
condensation phenomena and corresponding loss generation was studied. The
study demonstrated that the shape and size of the blades have a significant impact on the
entire condensing flow field and the loss generation in the LP turbine. The results revealed
that the elliptic trailing edge shape resulted in minimum losses. After including dimple
profiles, the Wilson point was altered and the location of condensation disturbance was
changed. Overall 8% reduction was noted in total loss with 100 μm dimple profile compared
to the base profile without dimple. The influence of turbulence modelling studies
revealed that the accurate turbulence modelling is required for precise condensing steam
flow prediction. The modified two-equation turbulence models are able to predict accurate
wet-steam flows.