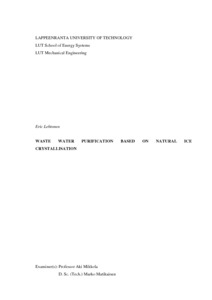 In this thesis, a test system for the breaking and harvesting of ice grown from water is
developed using a systematic methodology. The purpose of this system is to form a part of
a larger system to purify waste water by natural freezing. Once frozen the remaining waste
water would be removed and the ice formed broken and harvested.
The systematic process resulted in three viable breaking methods and three viable harvesting
methods. Of the three breaking methods, the one utilising bending was chosen to be tested.
This test consisted of two levers applying a force to the sides of a cylindrical container to
break the ice within. Ice harvesting was not tested.
Ice breaking testing was performed in the early winter months of 2016 and was deemed to
be reasonably successful. Ice was broken, albeit not consistently or in appropriate sizes.
Further experimentation and study of this method was deemed necessary.