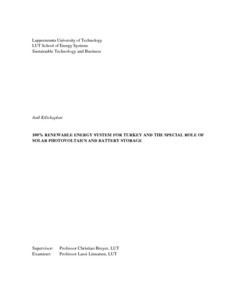 Economic growth, increasing population, urbanisation and industrialisation are the macro effects on increasing global energy demand. These indicators values are increasing in Turkey as well and will continue at least for next 30 years. Turkey’s energy policy is structured on energy supply security but in contrast to this, Turkey’s installed capacity has a major share of fossil fuel power plants. Fossil fuel based system has a dependency on other countries supplies and it is not sustainable from the environmental perspective as well, it is proven by air quality indices that are not within safe limits and lower than European Union averages. Thus, renewable energy share should be increased in current installed capacity. Solar potential will be the main resource in the study of Turkey’s transition and thereof the battery storage for system backups. The paper analyses 100% renewable energy (RE) systems for Turkey by an hourly resolution model for the year 2050 with 5-year steps transition. There are two scenarios in the model, the first one is power sector scenario that only includes electricity demand and the second is integration scenario that includes also seawater desalination power demand and non-energetic natural gas demand. This research showed that 100% renewable energy model is highly cost feasible, levelized cost of electricity (LCOE) is decreased to 56.7 €/MWh in power sector scenario and 50.9 €/MWh in integration scenario, total opex values in 2050 are less than 2015 values in both of the scenarios. the total capex is higher compared to power sector scenario due to other sectors are included cost calculations (desalination and non-energetic gas demand), when the desalination and non-energetic natural gas demand is included in the model. Turkey’s renewable energy potential is used in a nearly full potential for all related resources except solar. Even though the solar potential is less than 10%, total solar PV installed capacity is reached 287 GW in power sector scenario and 387 GW in the integrated scenario. Therefore, the battery usage increased in parallel and reached 561 GWh in power sector and 771.8 GWh.