Modeling configurator for real-time simulator of a tractor 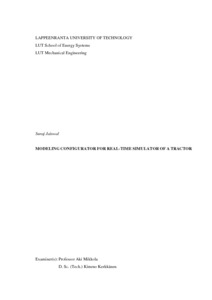 The foundation of this research work was laid by the vision of a tractor simulator where the users can generate their customized tractor model with the help of just a user-interface. The aim of this paper was to modify the attributes of the tractor simulation model. For the same reason, a modeling configurator was developed for the tractor model in python programming language with a user-friendly interface designed over Microsoft excel. This research work reports the effort in the development of modeling configurator for parameterizing a tractor model. The modeling configurator has been designed in such a way that the users can select their choices just from a drop down menu in the user-interface. The attributes that can be parameterized are maximum torque of the engine, maximum braking torque for the engine, number of forward and reverse gears. For tyre modeling, special attention was paid as the modeling configurator allowed users to select only from the standard tyres available, whose width and diameter are predefined. The mass and number of tyres can also be modified. At last, additional equipment that can be used in farming was also modeled as an assembly file. For additional equipment, only trailer has been covered within the scope of this research work whose mass is predefined. The modeling configurator was validated by selecting different options in the user-interface and then running the simulation file and noting down the differences. Some differences can be visualized like the number of tyres and attached trailer, while other differences can be seen with the help of plots like maximum torque of the engine, gear index, and tyre profiles. For the masses of the tyres, user can only feel the difference while running the simulator in real-time. At the end of the research, scope for future work is also suggested based on the limitations of this research work.