Design and development of communication system for mobile robot 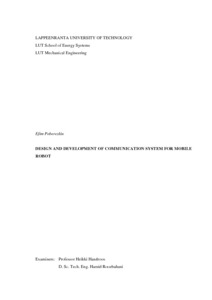 This work is focused on the research of several aspects of designing a communication system for a mobile robot and implementation of these aspects for the LUT Mobile Assembly Robot. The thesis discusses deployment of a mobile robot communication network, integration of robot’s components into it and designing software monitoring the state of the connection and reacting to it in order to prevent possible damage to a robot in case of an unstable connection.

Wireless networking technologies, and in particular Wi-Fi protocols, are being discussed. Deployment of a Wi-Fi based network for a mobile robot is explained. Networking tools providing reliability and security of communication are examined and implemented for the Mobile Assembly Robot. Several problems encountered during the integration of different control subsystems for this robot are discussed. In addition to Wi-Fi, Internet based communication over 4G protocol involving setup of a virtual private network is briefly examined. Its biggest advantage is secure remote control over great distances.

One part of the thesis focuses on mobile robot reaction to an unstable connection. The thesis discusses ways of monitoring and analyzing the state of the connection via different protocols and explains an implementation of a specific method. The thesis also discusses experimentation with delay of the response and statistical analysis of the delay.