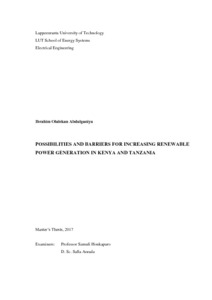 The growing concerns about climate change, energy security, and the need for access to modern energy services in developing and emerging economies have heightened interest in harnessing renewable energy resources (RES) in recent years. The main objective of this Master’s thesis is to examine the possibilities and barriers for Neo-Carbon Energy concept and related business in Kenya and Tanzania. The main idea in Neo-Carbon Energy ecosystem is a 100% renewable energy (RE) system where mainly solar, wind, and other renewables such as hydro, sustainable biomass, and geothermal are used as energy sources.
Kenya and Tanzania are both endowed with ample high quality renewable energy resources. The main source of energy services in both countries is the traditional biomass (firewood and charcoal). The electricity generation market in both countries is partly liberalized with moderate licenced power producers. Further, both governments have designed some regulatory tools (such as Feed-in tariff scheme, Standardized Small Power Purchase Tariffs, among others) in order to attract private capital investment in renewable power generation and accelerate the national electricity access rate. Yet, the level of investments in renewable electricity is presently not sufficient to meet the rapid growing demand for electricity in the two countries. In 2014, the per capita electricity consumption was 100 kWh in Tanzania and 171 kWh in Kenya, compared to Mozambique at 463 kWh per capita (a similar low income economy), and South Africa at 4,240 kWh per capita. In the quest for quick expansion of energy access, Kenya and Tanzania have both planned to diversify their power generation sources and the bulk of the power generation capacities are expected to come from fossil fuels (coal, oil and natural gas). Of notable concern is the prominent role given to fossil fuels in their respective power expansion plan, which could possibly defer investment in RE technologies and at the same time put the countries in an unsustainable and carbon-intensive path.
In the end, a 100% RE scenario in the year 2050 is developed and simulated using EnergyPLAN simulation tools for Kenya and Tanzania. The scenario results suggest that an energy system based on 100% RE is possible in the two countries by 2050 and to achieve this goal, high share of solar PV, wind power and different storage technologies are needed.