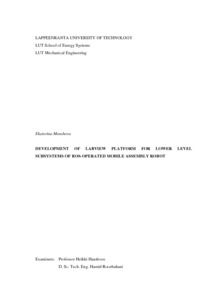 The problem of the repair, assembly or holding something in hazardous or dangerous for human beings environment has a great importance. The project of the Mobile Assembly Robot is suggested by the Laboratory of Intelligent Machines in Lappeenranta University of Technology as a solution of that problem. One of the essential aims of the robot is the sensorial connection with the space around it and monitoring the state of the robot itself. Development of the sensor monitoring and robot tools remote control system is the goal of the thesis. Devices used in the project: temperature sensors, fans, ultrasonic distance sensors, a lamp, inertial sensor are described as well as the Kalman filtering algorithm. Theoretical physical principles of sensors work are implemented into developed program in LabVIEW software. Communication between sensors mounted on the robot and the control station of the robot was set. Program software is developed for processing signals from sensors and sending information to devices onboard the robot. The result of the master thesis is the intuitive user interface of all low-level subsystems combined together. The interface demonstrates temperature of the robot under the cover, distance to obstacles, acceleration, angular velocity and Euler angles of the robot in the real-time mode.