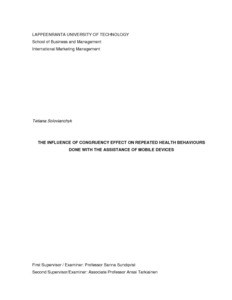 Can we improve an effectiveness of motivational health message by tailoring it according to affect experienced by an individual while he or she is exercising? This research attempted to address this question. The aim of this master’s thesis was to study a role of congruency effect in performing repeated health behaviours. Theoretical framework development was largely based on such fields of research as health message tailoring, emotions as a feedback system, and a goal-directed behaviour of individual. The study was developed in a form of a controlled experiment. Fifty-five individuals participated in the study. In regards to hypothesis testing results, both anticipated positive and negative emotions were positively related to a quantity of completed bodyweight squats. Intrinsic and extrinsic motivation, as well as BAS- and BIS-sensitivity were negatively correlated with a total quantity of performed bodyweight squats. The congruency effect did not augment an intensity of positive emotions and, therefore, failed to increase a quantity of completed bodyweight squats. There was also no positive relationship between an extent of goal over performance and intensity of positive emotions. The need for cognition did not mediate a relationship between the congruency effect and intensity of emotions with positive valence. All of the aforementioned study findings were statistically non-significant. Therefore, the research failed to address its aim. Yet, received test results could be considered as a starting point for future research endeavours. Despite statistically non-significant findings, one can consider collected data as a source of valuable trends that were revealed during hypotheses testing.