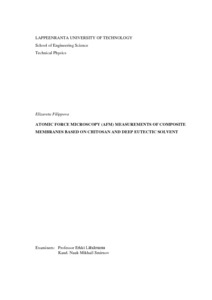 The composite membranes based on chitosan and deep eutectic solvent (DES), namely eutectic mixture of choline chloride and malonic acid, were prepared and studied by means of atomic force microscopy. PeakForce QNM and PeakForce TUNA modes permitted to visualize surface topography simultaneously with mapping of mechanical and electrical properties.
Surface heterogeneity was shown for the films with high DES content. The obtained Young’s modulus values were in qualitative agreement with bulk measurements by uniaxial extension. The topography and adhesion of films with high DES content were found to depend on the bias applied to the film.