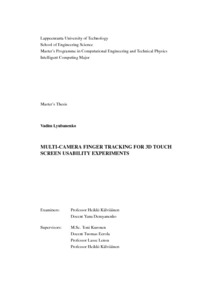 Three-dimensional Human-Computer Interaction (HCI) has the potential to form the next
generation of user interfaces and to replace the current 2D touch displays. The recent
progress in computer vision and object tracking has made it possible to get rid of data
gloves or other sensors that constrain user experience and to accurately measure hand
movements using a camera-based system. The objective of this thesis was to develop a
framework for recording human-computer interaction in 3D which is expected to form the
basis for the future study of touch and gesture based user interfaces. The research included
building of a multi-camera measurement setup, evaluating the eleven state-of-art object
trackers for the task of sustainable finger tracking, selecting a post-processing method,
combining data from a high-speed and regular frame rate cameras, and obtaining a 3D
trajectory. The developed framework was successfully evaluated in the application where
3D touch screen usability is studied with 3D stimuli. The most sustainable performance
was achieved by the SCT visual tracker complemented with the LOESS smoothing, and
thus, this combination formed the core of the proposed framework.