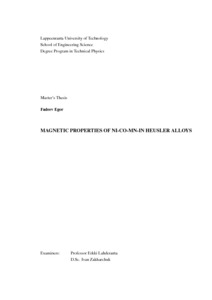 Magnetic properties and crystal structure of the bulk Ni48.5Co1.5Mn35In15 Heusler alloy have been investigated, using SQUID magnetometer and X-ray diffraction, respectively. Phase transition temperatures and their shift, under the inﬂuence of a change of magnetic ﬁeld, have been detected, using magnetization versus temperature dependencies (M (T)). The magnetization dependencies on magnetic ﬁeld (M (H)) at temperatures near to a martensitic transition temperature (TM) have been measured, in order to evaluate the magnitude of a magnetocaloric effect, namely a magnetic entropy change (∆Sm). Exchange bias (EB) phenomenon, that is attributed to ferromagnetic / antiferromagnetic coupling at low temperatures, has been observed during the M (H) at T = 5 K after cooling in positive magnetic ﬁelds up to H = 5 T. The shift of hysteresis loop (HE) is estimated as HE ≈ 145 Oe. The magnetic entropy change reaches its maximum value of -32.1 Jkg−1K−1 at T ≈ 314 K.