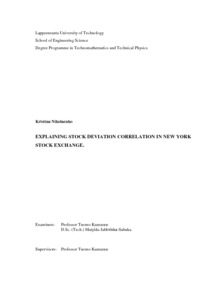 The development of a universal model that would allow us to describe the market sentiment, as well as identify and predict potential behavior of the economy, is very complicated. Economists, mathematicians and physicists are trying to solve this issue by applying various statistical tools, analysis and physical laws.
In this thesis, data from the New York Stock Exchange were taken as a basis for creating a simple model describing the state of the economy. A matrix of correlation coefficients between stocks was created, and further a normalization of initial data by Dow Jones and S&P500 indices was carried out on these data. A model describing the histogram data was selected and parameters for each of the histograms were constructed. As a result, based on the obtained parameters, a simple model enabling us to identify the rise and decline period in the economy was created.