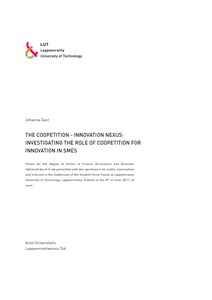 Coopetition, i.e. cooperation among competitors such as Daimler and BMW who recently
decided to merge their car sharing services, has become more than a buzz-word and has
inspired practitioners and scholars to increasingly draw attention to the existence of
relationships that include cooperative and competitive ties simultaneously.
The finding that collaboration with rivals can be beneficial for innovation represents a
valuable insight, because innovation is a major strategy to ensure firms’ long-term
survival. The role of coopetition for innovation may be particularly pronounced when
firms face scarcities in resources and knowledge, which may inhibit their innovation
capability. Typically, SMEs are confronted with such limitations, however, only some
studies have explored coopetition in this context so far. Instead, most coopetition research
has focused on large firms. By enabling important sharing mechanisms through which
resources and knowledge can be mutually accessed, developed, and integrated into the
coopeting firms, coopetition may symbolise an escape route for SMEs.
Given the lack of research and the potential importance of coopetition for innovation in
resource-constrained settings, the objective of this thesis is to demystify how SMEs,
including their typical sub-groups young SMEs and family SMEs, can boost innovation
through coopetition. This thesis is composed of two parts. Part I sets out the background,
literature, and conclusions of the thesis; Part II presents the six publications that apply
different scientific methods to answer the research questions.
The study makes three main contributions. First, it illustrates the infancy stage of
coopetition research as several open questions remain unanswered. Second, the insights
advance the knowledge of how coopetition can facilitate innovation in SMEs that face
shortages in resources and knowledge, including the two sub-groups of young SMEs and
family SMEs. Third, the thesis shows how family SMEs’ survival can be improved by
coopetition along with the family members’ socioemotional, non-economic objectives.
Additionally, the empirical findings reveal not only possible benefits but also risks
accompanying coopetition, which underlines the double-edged consequences of
coopetition.